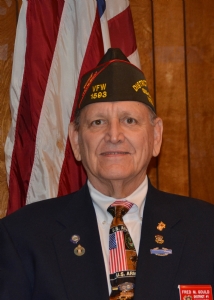 Frederick Michael Gould, age 72, of Ridgewood, on Thursday, September 13, 2018.
Frederick was born in Paterson and had lived in Ridgewood since 1978.
He served his country as a soldier in the U.S. Army from 1966-1968 in the Vietnam War. After his service, Frederick worked for NJ Bell / Verizon, first as a lineman and retired as a manager in the technology department. He was a member of the company’s Pioneers Club and the Skeeters Club.
Frederick was deeply devoted to many fraternal and veteran’s organizations. He was Past Commander of the VFW Post #1593 and Past Commander of VFW District #1 Passaic County.
With the VFW, Frederick was also the State Chairman for their scholarship program, Voice of Democracy. He held numerous positions on the state level with the VFW and was a former State Commander of the Military Order of the Cootie (MOC).
He was a Service Officer for the VFW and Paralyzed Veterans of America (PVA). He was also Past National President 4th Infantry (IVY) Division Association.
He was a Past Governor of Moose Lodge #657 in Clifton and was a member of the Wayne Elks Lodge #2181. Frederick was also an officer for the Special Children’s Committee of the Cerebral Palsy Center.
He was a member of American Legion Post of Ridgewood, NJ, The Society of the Fifth Division United States Army, and a life member of all the military organizations. He was a parishioner of Our Lady of Mount Carmel R.C. Church in Ridgewood.

To submit your request for TAPS, please complete the form below.